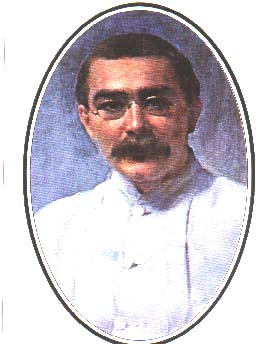 "There's no sense in going further - it's the edge of cultivation,"
So they said, and I believed it - broke my land and sowed my crop -
Built my barns and strung my fences in the little border station
Tucked away below the foothills where the trails run out and stop.

Till a voice, as bad as Conscience, rang interminable changes
On one everlasting Whisper day and night repeated - so:
"Something hidden. Go and find it. Go and look behind the Ranges -
Something lost behind the Ranges. Lost and waiting for you. Go!"

So I went, worn out of patience; never told my nearest neighbours -
Stole away with pack and ponies - left 'em drinking in the town;
And the faith that moveth mountains didn't seem to help my labours
As I faced the sheer main-ranges, whipping up and leading down.

March by march I puzzled through 'em, turning flanks and dodging shoulders,
Hurried on in hope of water, headed back for lack of grass;
Till I camped above the tree-line - drifted snow and naked boulders -
Felt free air astir to windward - knew I'd stumbled on the Pass.

'Thought to name it for the finder: but that night the Norther found me -
Froze and killed the plains-bred ponies; so I called the camp Despair
(It's the Railway Gap to-day, though). Then my Whisper waked to hound me:
"Something lost behind the Ranges. Over yonder! Go you there!"

Then I knew, the while I doubted - knew His Hand was certain o'er me.
Still - it might be self-delusion - scores of better men had died -
I could reach the township living, but... He knows what terror tore me ...
But I didn't ... but I didn't. I went down the other side,

Till the snow ran out in flowers, and the flowers turned to aloes,
And the aloes sprung to thickets and a brimming stream ran by;
But the thickets dwined to thorn-scrub, and the water drained to shallows,
And I dropped again on desert - blasterd earth, and blasting sky...

I remember lighting fires; I remember sitting by 'em;
I remember seeing faces, hearing voices, through the smoke;
I remember they were fancy - for I threw a stone to try 'em.
"Something lost behind the Ranges" was the only word they spoke.

But at last the country altered - White Man's country past disputing -
Rolling grass and open timber, with a hint of hills behind -
There I found me food and water, and I lay a week recruiting.
Got my strength and lost my nightmares. Then I entered on my find.

Thence I ran my first rough survey - chose my trees and blazed and ringed 'em -
Week by week I pried and sampled - week by week my findings grew.
Saul he went to look for donkeys, and by God he found a kingdom!
But by God, who sent His Whisper, I had struck the worth of two!

Up along the hostile mountains, where the hair-poised snowslide shivers -
Down and through the big fat marshes that the virgin ore-bed stains,
Till I heard the mile-wide mutterings of unimagined rivers,
And beyond the nameless timber saw illimitable plains!

'Plotted sites of future cities, traced the easy grades between 'em;
Watched unharnessed rapids wasting fifty thousand head an hour;
Counted leagues of water-frontage through the axe-ripe woods that screen 'em -
Saw the plant to feed a people - up and waiting for the power!

Well, I know who'll take the credit - all the clever chaps that followed -
Came, a dozen men together - never knew my desert-fears;
Tracked me by the camps I'd quitted, used the water-holes I hollowed.
They'll go back and do the talking. They'll be called the Pioneers!

They will find my sites of townships - not the cities that I set there.
They will rediscover rivers - not my rivers heard at night.
By my own old marks and bearings they will show me how to get there,
By the lonely cairns I builded they will guide my feet aright.

Have I named one single river? Have I claimed one single acre?
Have I kept one single nugget - (barring samples)? No, not I!
Because my price was paid me ten times over by my Maker.
But you wouldn't understand it. You go up and occupy.

Ores you'll find there; wood and cattle; water-transit sure and steady
(That should keep the railway rates down), coal and iron at your doors.
God took care to hide that country till He judged His people ready,
Then He chose me for His Whisper, and I've found it, and it's yours!

Yes, your "Never-never country" - yes, your "edge of cultivation"
And "no sense in going further" - till I crossed the range to see.
God forgive me! No, I didn't. It's God's present to our nation.
Anybody might have found it but - His Whisper came to Me!